WCLL begins its 21th year of competition in the WCLA

About the Women's Collegiate Lacrosse League

Welcome to the Women's Collegiate Lacrosse League (WCLL), an intercollegiate club lacrosse organization, divided into two divisions, that represents 47 universities and colleges that stretch a geographic region from as far east as New York and west to Missouri. The WCLL, the largest club league in the continental United States, is beginning our 21th year of competition and we look forward to serving the many student-athletes in our conference. In the WCLL's long tenure, we have experienced the growth of womens' club lacrosse, whether watching a university club program transform into an NCAA scholarship opportunity or just witnessing a smaller club team enjoy the fruits of friendship, while competing in a shared experience. The WCLL's historical landscape is scattered with a number of successes and we're hopeful the trend will continue in 2015. We believe in our mission and fully support US Lacrosse and all that they represent. Our basic mission is simple:
WCLL Mission Statement
The mission of the Women's Collegiate Lacrosse Association (WCLL) is to develop the athletic opportunities of its participants, nourish the educational challenges of scholastic life and enhance the collegiate experience. We should strive to provide our student-athletes with a positive and creative outlet for their athletic hopes and serve our membership because we believe that fellowship and sportsmanship have value.
If you are interested in learning more about our WCLL or the Womens' College Lacrosse Association (WCLA), our national organization, please contact WCLL League President League President Gary Neft at 1.800.240.0178 or garylax@aol.com 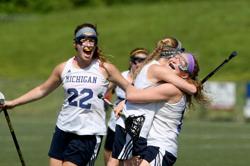 By Paul Ohanian
VIRGINIA BEACH, Va. - The Michigan Wolverines almost made their coach cry today. Fortunately, they were near tears of joy for David McKinnon after his Wolverines claimed their first US Lacrosse Women’s Collegiate Lacrosse Associates (WCLA) national championship with an 11-8 win over Virginia Tech in the Division I final at the Virginia Beach Sportsplex Stadium. Michigan (19-1) used a 6-0 scoring run in the second half to rally for the victory.
"I don’t cry a lot, but I feel like doing so right now," McKinnon said just moments after the Wolverines accepted their championship trophy. "I’m as proud as I’ve ever been and really happy for our girls."
Trailing 7-5 midway through the second half, Michigan started its comeback when junior Ellen Manson scored her third goal of the game at 15:25. Three minutes later, Emma McGreggor scored on a free position to knot the score for the first time since it was 1-1. Another free position goal by Annie Bennett at 9:52 put the Wolverines in front for the first time, and Maddie Freed then converted a third free position at 8:08 to pad the lead.
Manson eventually added two more tallies to cap the run, and finished with a game-high five goals. She was selected as the tournament’s most outstanding attacker.
"Our attitude was just to chip away one goal at a time," Manson said.
Fueled by upsets of No. 1 seed Santa Clara and No. 4 seed UCLA earlier in the tournament, the eighth-seeded Hokies entered the game as a confident bunch and played that way throughout the first half. Two goals each by senior Caitlin Lentz and sophomore Marisa Cole helped Tech build a 6-4 halftime lead. But the second half proved to be a struggle following Michigan’s defensive adjustment that included using All-American goalie Grace Collins a bit further from the cage.
"We were trying to stop them from feeding from behind, so we decided we needed to apply more pressure," said Collins, who finished with six saves and was named the tournament’s most outstanding goalie.
"Grace is athletic enough to be an eighth defender," McKinnon said. "We’re able to use her to break up passes and intercept passes from behind."
Manson finished as the only Michigan player with multiple goals. Six others added one goal each for the Wolverines, including Bennett, who was selected as the tournament’s outstanding midfielder.
Virginia Tech returned to the championship game for the second time overall and the first since winning the title in 2009. Following last year’s tournament appearance, the team considered hiring a coach and interviewed candidates last fall before deciding to maintain the status quo. Clearly, they proved once again that a self-run club with no paid coach can still find success in the WCLA ranks.
"We decided that having a coach wasn’t for us," said player-coach and club president Brooke Cope. "When it’s self-run, the coaching is on all of us."
This year’s team featured nine seniors who have played together for four years, including Taylor Scott, who was selected as the tournament’s most outstanding defender. Virginia Tech finished the year with an 18-4 record.
Saturday Scores
3th Place Game: UCLA 19, Texas 6
5th Place Game: Georgia 15, Colorado 7
7th Place Game: Pittsburgh 14, Santa Clara 11
9th Place Game: Penn State 12, Massachusetts 4
11th Place Game: Cal Poly 12, Delaware 11 (overtime)
13th Place Game: Towson 19, San Diego State 11
15th Place Game: Minnesota 17, Maryland 10
All-Tournament Team
Allison Pedro, Maryland
Sheila Hirsch, Minnesota
Haley Stone, San Diego State
Christina Antonini, Towson
Mara Gluck, Delaware
Amanda Rolander, Cal Poly
Mary Newton, Massachusetts
Erica Metheny, Penn State
Dana Kilsby, Santa Clara
Anna Studenmund, Pittsburgh
Sophie Mercuris, Colorado
Katie Ezell, Georgia
Madeline Beecherl, Texas
Katie Koller, UCLA
Emma Dudley, UCLA
Molly Tracy, UCLA
Sam Weinstein, Virginia Tech
Emylee Esteban, Virginia Tech
Taylor Scott, Virginia Tech
Gracie Collins, Michigan
Katie Mezwa, Michigan
Annie Bennett, Michigan
Keeper of Lacrosse Team Sportsmanship Award
Minnesota 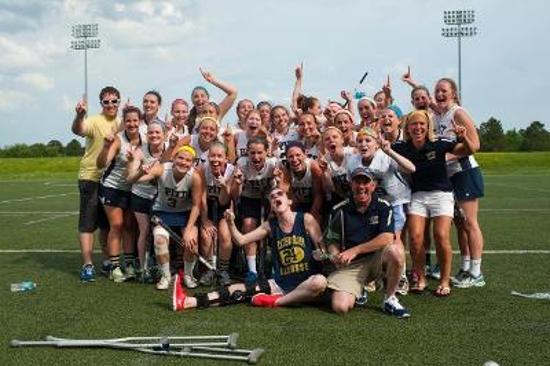 PITTSBURGH IS NATIONAL CHAMPS - The reigning WCLA National Division I champs hail from the University of Pittsburgh and the WCLL. The team is coached by veteran Gary Neff. 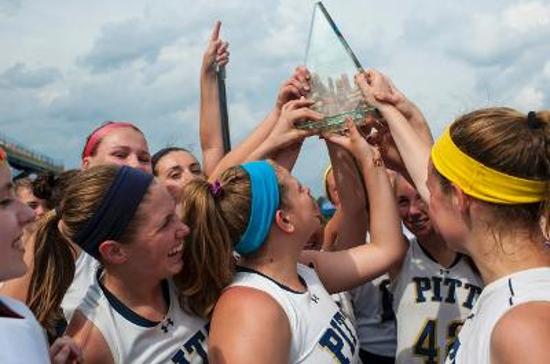 RAISING THE TROPHY - The WCLL landed its first national champion in WCLA history, when the Pitt Panthers won their first championship in May, 2014 at Virginia Beach, Virginia.