DUKE PROVES TO BE REAL NO. 1 WCLA DIVISION II SEED 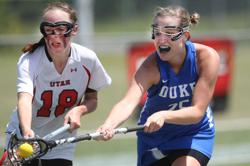 VIRGINIA BEACH, Va.  – Top-seeded Duke capped an undefeated season with an overpowering defensive effort to defeat No. 2 Utah, 8-3, in the final game of 2015 US Lacrosse Women's Collegiate Lacrosse Associates (WCLA) Division II National Championship, presented by Harrow Sports. Duke (16-0) scored the opening six goals of the game and never allowed the Utes to get untracked while capturing their first WCLA title.

"We've been building for this for three years," said Duke coach Alexis Thieme. "All we talk about is the 'road to the nationals.'"

On Saturday, the road to the title went through the Blue Devils' defense, which is often overlooked due to its dynamic offense. Duke consistently frustrated Utah's attackers and repeatedly caused turnovers that led to its own long possessions. Defenders Sydney Segal, Anne Marie Guzzi, Julia Tuttle and Annie Maas formed a cohesive unit in front of goalie Julia Tuttle, who needed to make just three saves in the win.

"We consider re-defending as being one of our strengths," said Guzzi, who was selected as the tournament's most outstanding defender. "We're a good communicating team which really helps us to mesh on defense."

Freshman Maddie Merke and sophomore Elle Wilson provided all the offense that the Blue Devils would need by combing for seven goals. Merkle finished with a game-high four markers and was selected as the tournament's most outstanding attacker.

"Utah made us work for good shots because their goalie really played well," Merkle said. "But we were able to be patient in the second half because we had the lead and didn't mind keeping possession."

Senior Katie Baker tallied two of Utah's three goals, while freshman goalie Sasha McKee tried to keep her team in the game with 12 saves. McKee was selected as the tournament's most outstanding goalie. Utah (19-3) finished as the national runner-up for the second time in three years.

Both teams finished with their lowest scoring totals of the season and the 11-goals combined were the fewest scored in the championship game in the six-year history of the WCLA D-II Championship.

Ultimately, none of that bothered the Blue Devils.

"This has been an incredible season" Merkle said. "Joining this team was the best decision I've made since getting to Duke."