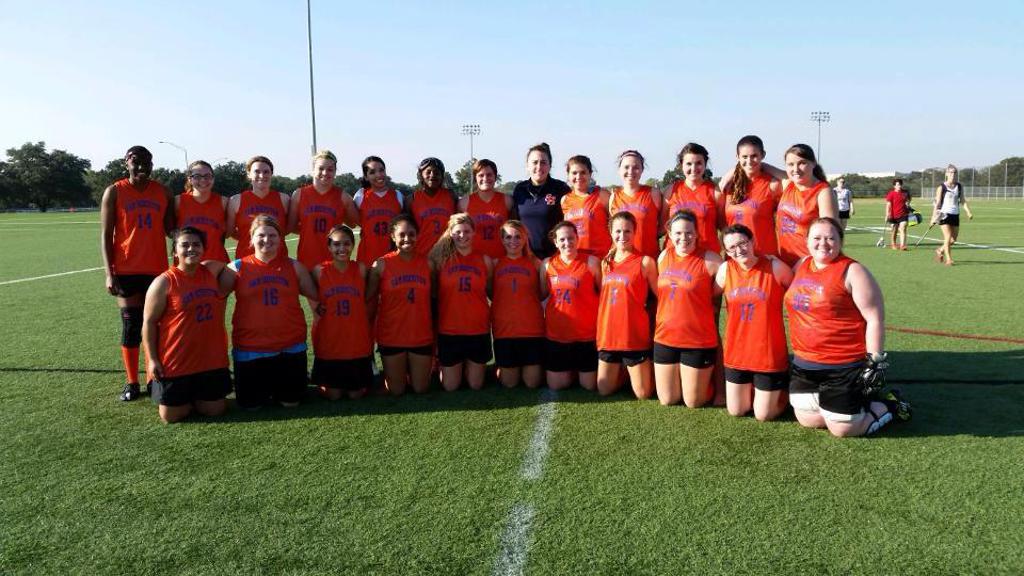 Winning Attitude Allows Women's Lacrosse To Rock On, Off The Field

A winning attitude can carry a team a long way.

This year, a hugely positive outlook—combined with an involved coach and an increase in players—is translating the Women’s Lacrosse Team’s winning attitude into a winning season, in more ways than one.

The team is already off to a strong start after winning their first game of the season against Trinity 14-7. After practicing hard all fall, these women are seeing that their effort has truly paid off.

“Trinity clobbered us last year,” said club president Miranda De La Morena. “A win against them is a really big deal for us, especially because a lot of our players are new.”

In September, women’s lacrosse hosted a new player clinic and enjoyed a phenomenal turn out.

“We had 19 new girls come to learn how to play lacrosse and join the team,” said De La Morena. “Overall, we began last practice season with 25 girls, we still have 20 currently playing which is fantastic.”

The team is a club organization focused on creating a strong camaraderie both on and off the field. A majority of the players on the team had never held a lacrosse stick in their lives before joining the group at SHSU.

The team’s increased volume lends the ability to push harder and reach farther. In previous seasons with fewer players exhaustion would affect the way the women could play.

“Now that we have the numbers, I think the team be able to accomplish so much more,” said Nicole Albrecht, lacrosse player who graduated in December. “Not only will we be out there having fun, we’ll also probably be able to win a lot more games. Before, other teams would be about twice our size, and that would give them a huge advantage.”

In addition to increased player volume, the team is also taking advantage of their full-time coach, SHSU alumna Allisa Blanton.

“I couldn’t lead this team without her,” said De La Morena. “She prepares all the drills for each practice, all of our plays. She played here while she was a student and went on to coach high school and middle school teams before coming here. The whole team benefits so much from her experience.”

From a coaching standpoint, Blanton found that increased membership also meant a spike in internal motivation for individuals who would benefit the team as a whole.

“Before, when we only had a handful of girls, they couldn’t push each other as much,” said Blanton. “Now that we have 20 players, they can all really push each other to improve, especially now that our 20 players are fighting for 12 spots.

Although winning is an important goal for Women’s Lacrosse, it is not the team’s first priority.

“I remember when we played Baylor last year,” said Blanton. “We scored one goal all game and they scored 11. When we made that goal we celebrated like crazy.

“What I look for as a coach is improvement. We want to have fun, be a family, and work together. Meeting those goals is a lot more important to me than beating numerous other teams.”

It’s this winning attitude that attracts so many women to this organization, according to sophomore and vice president for the team Kathleen Geuea.

“I’ve made friendships that will last decades because of this team,” said Geuea. “You can tell the difference when we walk on the field against a team that isn’t like a family the way we are. You see us and it’s almost like night and day.”

The women’s lacrosse team comprises an extremely diverse group of women, from members of sororities to members of the armed forces. While some would assume that this diversity could cause divisiveness within the group, officers of the organization find pride in the strong sense of unity within the team.

“We’re very much like a family,” said Geuea. “When I was a freshman and I was having a tough time finding a social group, people here on the team made me feel like I really belonged. This is such a welcoming organization, and members get the added benefit of staying active and playing a sport. It was really positive for me.”

The women’s lacrosse team continues to push in order to make their presence as an organization and a sport known on campus.

“People up north play lacrosse like crazy, it’s an interesting sport, I just don’t think many people around here are aware of it,” Albrecht said.

De La Morena acknowledges the challenges that come with promoting a lesser-known sport.

Although the season of play is underway, women’s lacrosse is still welcoming interested players with open arms.

“I ordered 30 jerseys at the beginning of the season,” said De La Morena. “I plan to fill every one of those jerseys. If people want to play, we want to train them. Then we’ll really be a force to be reckoned with

Those interested in learning more about Women’s Lacrosse at SHSU can contact De La Morena at mnd017@shsu.edu.